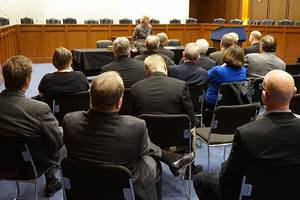 The Wisconsin contingency sits down to address energy issues with Senator Baldwin.

Over 500 public power leaders from across the country gathered in Washington, D.C. March 9-11 for the 2015 American Public Power Association (APPA) Legislative Rally. MEUW members once again participated in the event as an opportunity to learn more about legislative issues impacting the industry and to share their insights first-hand with federal lawmakers and staff.

Wisconsin’s contingent continually ranks among the largest annually, and this year was no exception. Just over 60 were in attendance as part of the MEUW/WPPI group, with 28 member communities represented from across the state. The MEUW/WPPI contingent met with a total of 10 congressional offices including: Congressman Duffy, Kind, Petri, Pocan, Ribble, Ryan, Sensenbrenner, Congresswoman Moore and Senators Baldwin and Johnson. Wisconsin attendees also participated in the APPA Legislative & Resolutions Committee proceedings and networked with public power advocates from around the country over the three-day event.

The APPA rally provides a valuable opportunity for public power leaders to be engaged in the legislative process.

The APPA rally provides a valuable opportunity for public power leaders to be engaged in the legislative process. The benefit for MEUW member utilities and MEUW as an organization is stronger relationship building with staff and congressional representatives; which in turn increases influence. The main issues discussed this year included EPA’s Clean Power Plan, creating a balanced approach to cyber security regulations for utilities and tax-exempt municipal financing. If you are interested in the legislative process, please consider attending the 2016 APPA Legislative Rally which is scheduled for March 7-9.
Post a Comment